Which is the more effective and accurate method of testing a magnet separators strength?

In the wake of increasingly tougher food industry regulations, such as from the FDA (FSMA), USDA, and HACCP, it is essential that food processing companies have proper controls in place to prevent metal contamination in final food product. Magnetic separators are one of the most common metal fragment controls, alongside metal detectors and x-ray systems.

Food processing companies and magnet manufacturers agree that frequent testing and validations are essential to ensuring magnetic separators are working optimally and providing a positive contribution to food safety and quality control…but the method of testing has been the topic of debate for many years.

Some magnet manufacturers or suppliers will argue that pull testing is the most accurate method, whereas others favour gauss testing.

The basic aim of this testing is to record the magnets strength. It goes without saying that a stronger magnet will be more likely to attract and retain fine metal contaminants from a food processing line as opposed to a magnet with low strength. Typically speaking, a magnet should retain its strength for several years, so usually an operator is looking for a decline in magnet strength (or demagnetization) which could be caused by oxygen absorption, rough handling/dropping, thermal shock, etc.

IMPORTANT NOTE
Before we delve into the topic further, it is important to note that a magnets ‘strength’ or ‘field’ should not be relied upon alone to determine a magnetic separators effectiveness or suitability to an application. Anyone that claims their magnet is the best or most effective because it has the strongest pull or gauss reading is mistaken and misinformed. AMR Magnet Validation Reports take several other factors, aside from strength, into account before judging a magnets effectiveness. 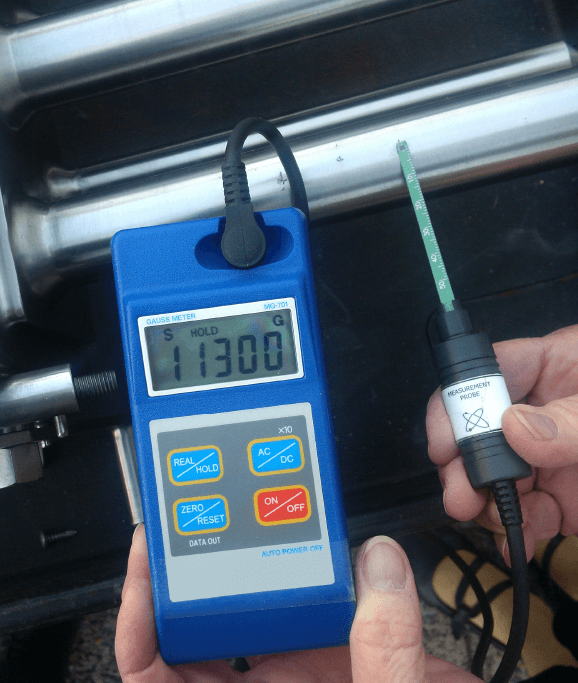 What is gauss testing and pull testing, in simple terms?

Gauss testing involves using an electronic device called a gaussmeter to measure the ‘magnetic flux density’ (also known as ‘magnetic induction’ or ‘magnetic field’). The gaussmeter probe is placed on the magnets surface and moved toward the high strength pole until the peak high gauss (G) reading is shown on the screen.

A pull test device consists of a small steel test ball which is placed on the magnets surface and then ‘pulled off’ by the operator. The measurement of ‘pull’ or the breakaway force that is required to do so is regarded as an indication of the magnets strength (or holding force) and is measured in kilograms or ounces.

Both methods are relatively fast to complete and should be repeated multiple times (5+) and then averaged for a more realistic result.

After years of experience, research, and discussion with industry professionals and food safety boards such as HACCP International, it has been determined that testing of a magnetics ‘strength’ is most accurately done with a calibrated gaussmeter.

The figures for gauss and pull test confirm that pull in ounces is not an SI value, meaning there is not an equivalent ratio between gauss flux density and ounce pull over a variety of magnets.

The most efficient magnet grate tube or bar for separating fine and weakly magnetic contamination is not the magnet showing highest pull test value. The most efficient magnet will have the highest gauss at shortest distance between pole bands centres.
It is for these reasons pull test is not allowed in the current MAGSEP Standard as basis for certified magnet validations.

Designed by ONE WEST MEDIA

What is the difference between Pull Testing and Gauss Testing

Essential Specs for Maximum Efficiency and
ROI in Magnetic Separators

Please leave your details below and your requested file will be sent via email shortly.

Magnets In The Baking Industry Whitepaper

Please leave your details below and your requested file will be sent via email shortly.